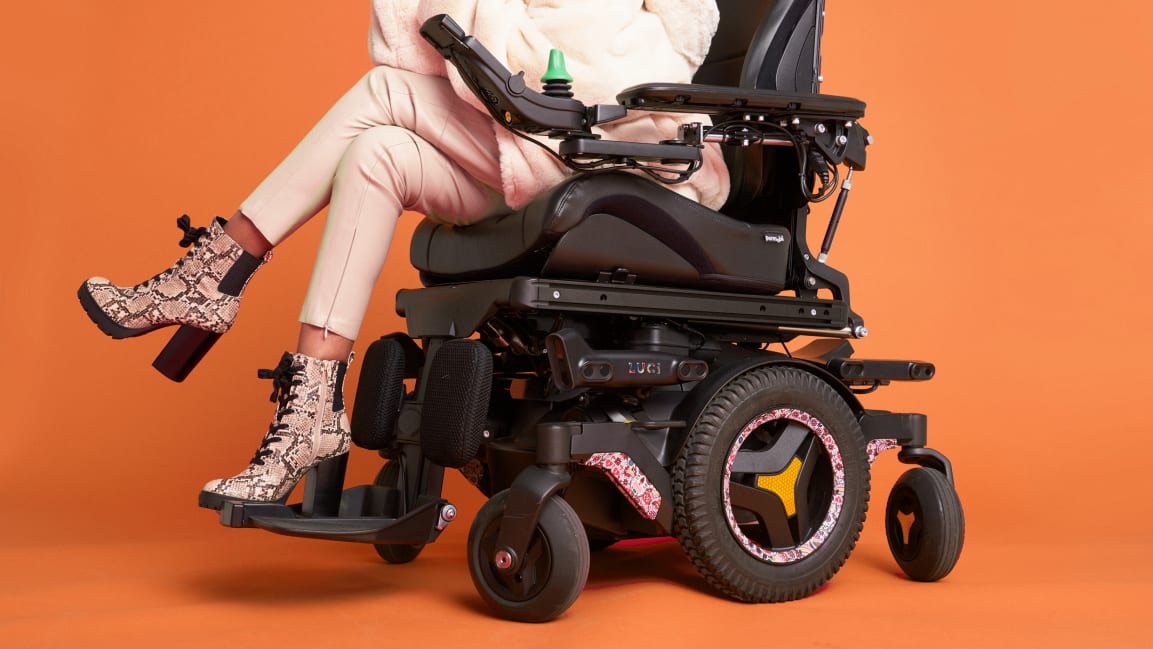 Seeing how little innovation there was in his daughter’s wheelchair, country songwriter Barry Dean and his engineer brother built LUCI, a way to upgrade any wheelchair’s tech.
BY TALIB VISRAM
4 MINUTE READ

For Katherine Dean, using a wheelchair means having to leave events too early or stay wearyingly late, to avoid the risk of navigating teeming crowds. She had to leave a Paul McCartney concert early, painful for a big Beatles fan; in the case of Disneyland fireworks, she had to wait until everyone else had left in order to go home safely.

Power wheelchair users continually encounter this stress—and often sustain injuries from collisions and tipping over. Of the roughly half of wheelchair users who reported an injury over a three-year period, 87% said it was a tip or fall. Another study found that wheelchair accidents accounted for more than 100,000 ER treatments in 2010 alone. Katherine’s father, country song writer Barry Dean, knew those stats, and was also troubled by personal anecdotes: a friend’s daughter, who used the same wheelchair as Katherine, “took a horrible tumble off a ramp.” One woman he spoke to had to have her toes amputated after crashing so hard into a wall.
That’s why Barry and his brother, Jered, an engineer, built a new wheelchair technology and a hardware accessory. She gets one life,” says Barry of his daughter, who has cerebral palsy. “Am I gonna wait till she’s 40 for [her wheelchair] to do things that my bathroom scale or my toaster can do?”

It began as a “hobby,” but after research and contact with clinicians, it became a larger project that would eventually lead to forming a company and hiring a team of 11 or 12 full-time employees. The end result, which launched June 18, is LUCI, a smart software incorporated into a piece of hardware—the LUCI unit—that mounts between the seat and wheels of the chair, to provide stability and sensing capabilities. (LUCI is named after Katherine’s favorite Beatles song, “Lucy in the Sky with Diamonds.”) The tech uses its own infrared, ultrasonic, and radar sensors, which help judge distance, obstacles, and other details of the surroundings, to create a smoother riding experience. The company collaborated with Intel’s RealSense team to improve mapping.

“Impatience drove this,” Barry says. Most people aren’t tuned into the problem, and it’s largely ignored by software startups and the medical field. Impressed by the software, a potential investor told Barry: “We should do lawn mowers and golf carts, and then if you want to do the wheelchairs, you can do that.” The brothers self-funded instead.

With the help of their Denver-based test track, they built the technology that helps users drive with more speed and steering control. It’s like using a car’s power steering versus manual, Barry says; as you navigate, the wheelchair speeds up or slows down according to surroundings and space, which helps avoid collisions, and is more user-friendly than the rigid speed settings on a non-accessorized chair. It’s sensors also don’t allow you to run into anyone, helping a user move smoothly and confidently with a crowd, so they wouldn’t have to stay super late at Disneyland or miss the end of a McCartney concert.

It also aims to prevent tipping by monitoring ground steepness and avoiding raised platforms like ramps and curbs. Even when raised just three inches, chairs can flip—and with 300 to 400 pounds plus the weight of the rider, the accidents can easily cause injury. But even in the case of a tip over, the system can alert family members, doctors, or anyone chosen by the user, delivering detailed data on the whereabouts of the individual via text. It can also be integrated with Alexa and Google Assistant for remote voice control, and the LUCI app and web portal can track the user’s heart rate, battery status, collision data, and allow riders to send that data directly to the LUCI team for troubleshooting.

On June 18, the Deans will start a waiting list for the chairs, which should be available for distribution in the fall, for $8,445 apiece. While they haven’t yet secured reimbursement codes for medical insurances, that’s a top priority. And they hope the platform will bring the issue to people’s consciousness, so others may innovate further in the area.

The brothers have fostered a culture of care around the project, because it’s personal—not just because of Katherine, but also because of all the other stories they’ve learned. When they began crash tests, they searched on Craigslist and eBay for chairs, and the first was from a recently deceased woman who had suffered from ALS. She’d only used her chair a few times, but then stopped because it had felt unsafe. The Deans decided to stitch her name, Bethany, into the chair’s fabric, and they did the same for the former owner of each of the test chairs they collected. That instantly transformed crash-test mischief into life-changing assessments.