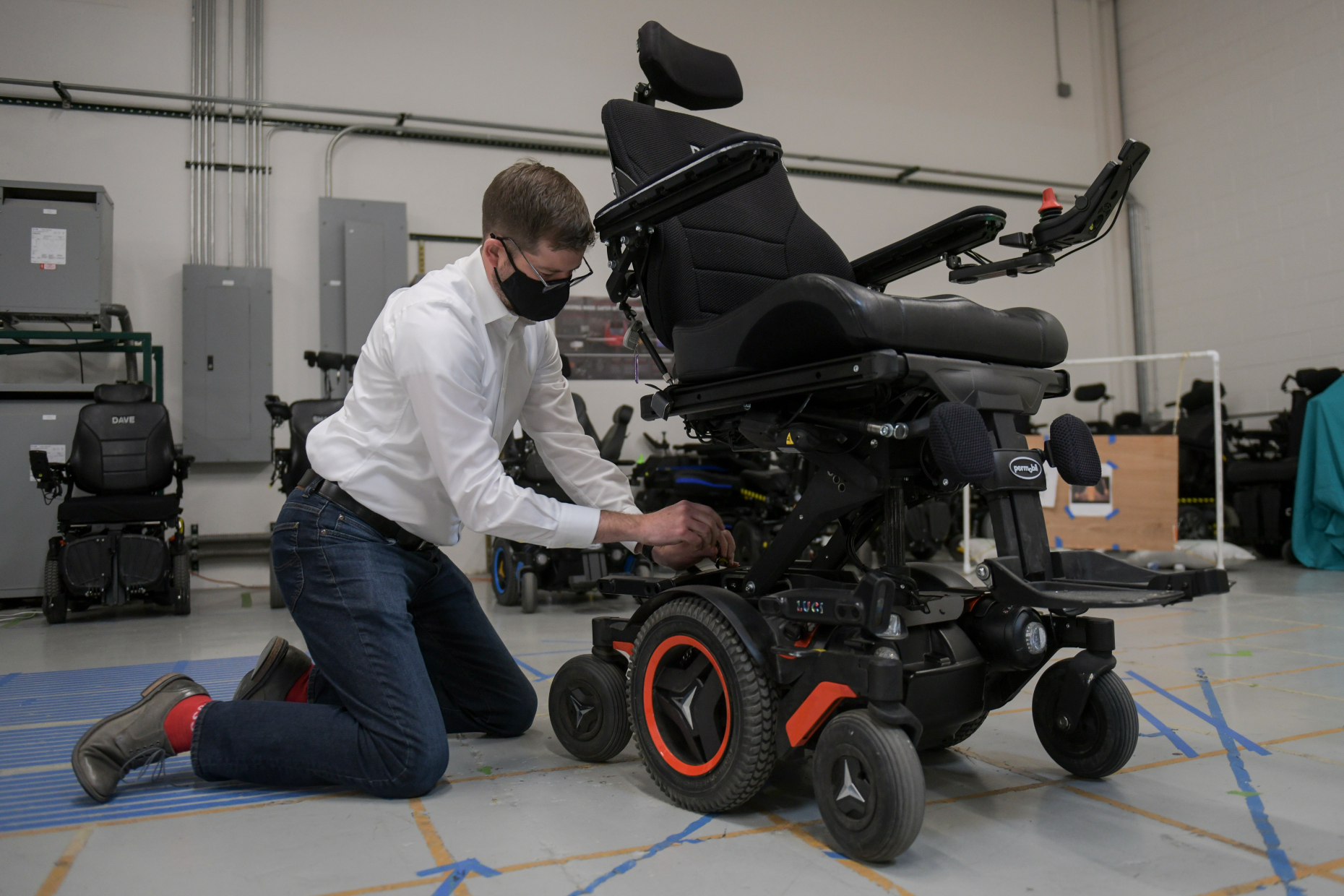 By Judith Kohler, The Denver PostDecember 15, 2020No Comments

LUCI lauded as one of the year’s best inventions by TIME, Popular Science

A labor of love by a father, Barry Dean, and uncle, Jered Dean, has turned into a company employing cutting-edge technology and what is being hailed as one of the year’s best inventions.

About three years ago, the brothers began designing and engineering an addition for the motorized wheelchair used by Barry’s daughter, Katherine. The changes were meant to make it safer and “smart,” connecting it to the internet so she can interact with the same up-to-date technology a lot of people use.

The project that morphed into a company named LUCI was recently named by both TIME magazine and Popular Science as one of the best inventions of 2020. And last week, the Deans signed a deal with Numotion, a national wheelchair and rehab technology company, to distribute the product that attaches to power wheelchairs.

“It was driven by my daughter, Katherine. We started looking for solutions and we couldn’t find them,” said Barry, an award-winning songwriter who lives in Nashville and is the company’s CEO.

Barry and Jered, a former Colorado School of Mines professor and the company’s Colorado-based chief technology officer, wanted to make a safer, more modern wheelchair for Katherine, 20, who has cerebral palsy. They said research showed that accidents, spills and injuries are common in power wheelchairs, which weigh at least 350 pounds.

One study showed that nearly 55% of the participants reported at least one accident over three years and 16% reported two or more. There are many stories of people dropping off the edge of the sidewalk and into the street, running into walls, not being able to maneuver in their homes and even rolling into ditches.

“When Katherine got her first chair, she was a little girl, probably 5 or 6,” Barry said. “The first thing that happened in the clinic is the chair took off down the hall and slammed into a wall. Thankfully, she wasn’t horribly injured.”

After attending a conference to check out the latest in power wheelchairs, the brothers discovered little had changed over the years. So they started modifying Katherine’s chair.

“At the very beginning, it was going to be that we’ll pull something together for Katherine’s wheelchair because surely the real technology exists out there,” Jered said.

But when it was clear that wasn’t the case, the brothers decided to build a more robust version of the add-on made from off-the-shelf ultrasonic sensors and other equipment for Katherine’s chair.

LUCI officially launched in June. The name comes from Katherine’s favorite Beatles song, “Lucy in the Sky with Diamonds.” The use of an “i” in the name made it easier to secure web domain names.

The brothers built an engineering team that works with Jered in Arvada and a sales and marketing team based in Nashville. They found partners and teachers in such fields as precision agriculture and autonomous vehicles as well as experts in technology and design for people with disabilities, including staff at the University of Colorado-Denver Center for Inclusive Design and Engineering.

“It just had to change, and it was inevitable that some day people would turn their attention to and care about the group of people that my daughter was a part of. But we were just impatient to wait for that,” Barry said.

The Deans and their teams used data gleaned from thousands of hours of use by Katherine and other testing.

“We tried to put our pre-COVID hat on. We had to think about everywhere you would go in a typical week,” Jered said. “What we learned is this was a much more of a design challenge than we thought when we got into it. You’re working within centimeters of things, working in all environments, day and night, indoor and outdoor, on sidewalks instead of a street where you have a stripe to follow.”

Jered has degrees in mechanical and systems engineering. He worked for about a decade at Syncroness in Westminster, where he helped develop products.

At LUCI, Jered and his team developed custom, proprietary ultrasonic sensor packages and wave-radar technology. They work in a large warehouse in Arvada that has an office and plenty of room for a mock-up of a home and other spaces to test drive wheelchairs.

The Deans wanted to give wheelchair users the same opportunities to use technology that other people have. They added software to connect the chair to the cloud, allowing users to interact with Alexa and Google devices. For example, people can ask one of the devices to check whether the wheelchair is charged.

A “smart” wheelchair can alert people to the user’s whereabouts and health issues.

“We have all these smart technologies in our homes and in our cars, and we as a society use these technologies every day without even thinking about it,” said Becky Breaux, an instructor at the CU-Denver Center for Inclusive Design and Engineering.

People with disabilities have often been left behind, added Breaux, who is an occupational therapist and assistive technology specialist. One of Breaux’s clients is among those who have worked with the Deans to improve LUCI. The technology allows the young man to do what he hasn’t been able to do for eight years: use his power wheelchair in his home.

Before, because of issues with his vision and spatial awareness, the man damaged the walls and furniture to the point that his family didn’t want him using the power wheelchair inside, Breaux said. “In a manual chair, he can push himself with one hand, but it really takes away quite a bit of his independence.”

In other cases, power wheelchairs without updated safety features can be dangerous to the user, Breaux said. “I’ve been practicing for over 25 years. I could tell you a lot of stories about clients I’ve had who’ve had serious injuries or near misses.”

Breaux said a client who was driving her chair outside had a seizure and woke up in the middle of traffic. Another client had to have major neck surgery because he rolled his chair in a ravine while on a trail.

High-tech sensors and connection to the internet should help prevent similar accidents and can alert family members and caregivers when help is needed, Breaux said. Some chairs have sensors, but Breaux said the technology isn’t sophisticated enough to judge spaces and people end up tuning out the beeps or turning off the noise out of annoyance.

At this point, LUCI’s $8,445 price isn’t covered by insurance. Although the cost sounds high, the Deans say power wheelchairs can cost tens of thousands of dollars, depending on their features. They hope the medical and financial benefits of a safer, smart wheelchair will lead to coverage by insurance companies and Medicare and Medicaid.

“Anecdotally, I can tell you I think the equipment will significantly reduce costs for repairs,” Breaux said. “So it’s protecting the equipment itself, but also the medical costs associated with those clients who have these injuries.”

Of course, the most important benefits are for the users themselves, Breaux added. “This important safety feature has been considered a luxury up until this point. Most people say not rolling over in a ditch is not a luxury.”