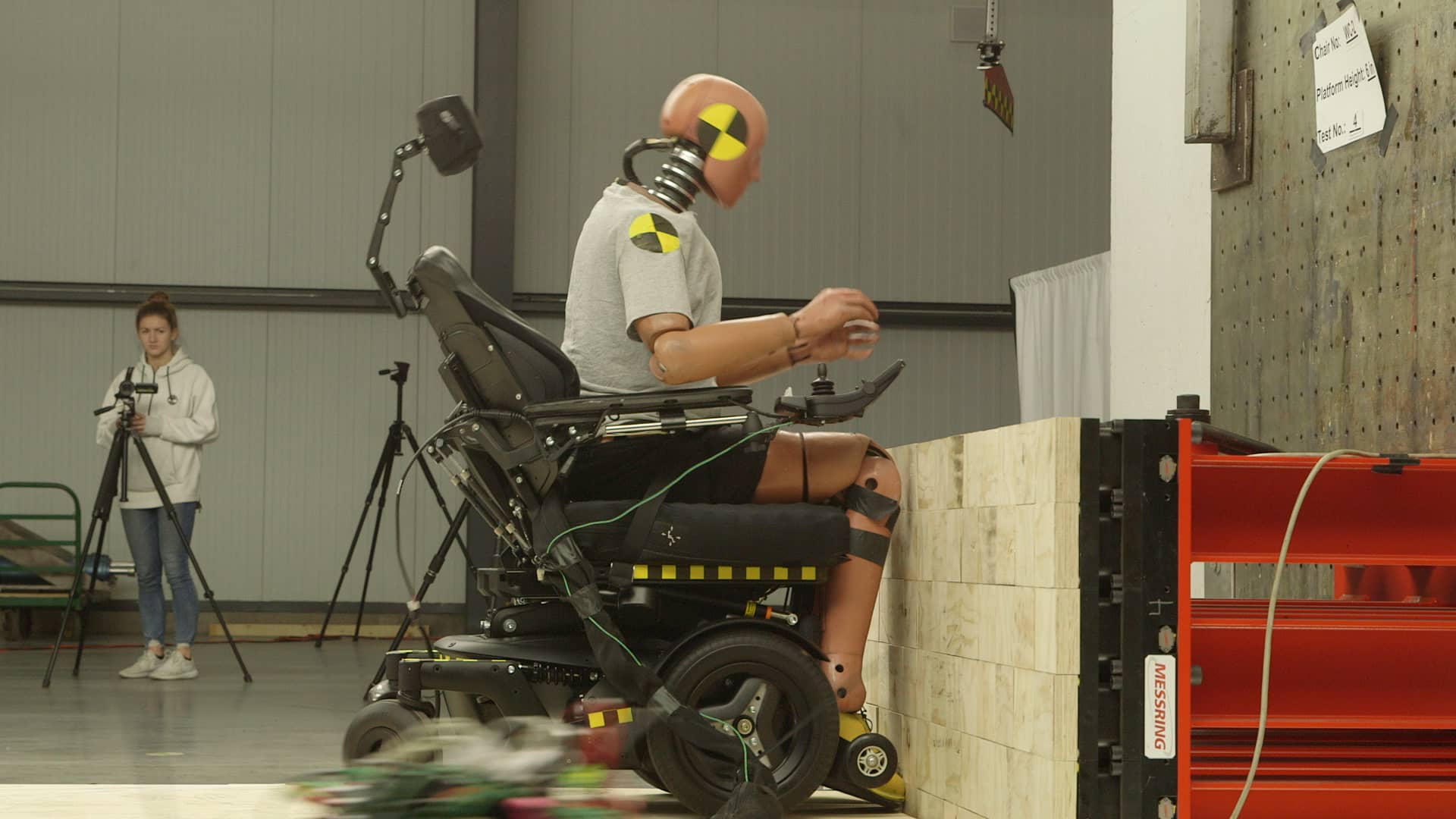 It’s no secret that powerchairs crash. When they do, they often cause riders additional harm.

Sadly, for decades, the industry’s only solution has been to install a seatbelt ensuring that when a powerchair falls over – which can happen with as little as a 2.75-inch drop-off – you hit the ground along with 300+ lbs. of powerchair attached to you (and all of the force that comes with it).

Dr. Matt Maltese, a faculty member at the University of Pennsylvania Department of Bioengineering, to conduct our own powerchair crash tests  studying the nature of the two of the most common powerchair crash scenarios:

*Additional details about our research are included below, but it is key to note that – in keeping with crash testing of motor vehicles – we used a crash test dummy that was instrumented with accelerometers and rotational velocity sensors to measure the motion of various parts of the body subsequent to impact.

Test Scenario 1: Running off of a short ledge

What happens to the chair?

As you will see in our Crash Test video linked above, the powerchair travels forward and slightly to the right until its right main drive wheel goes over the ledge. The powerchair begins to tip to the right, forward travel ceases, the powerchair continues tipping and becomes fully horizontal as its “lateral aspect” (side) hits the ground.

What happens to the rider?

Scientists and engineers have developed mathematical relationships to estimate the risk of traumatic brain injury measured by the angular-velocity sensors in the head of a crash test dummy. As you read the additional outcomes listed below, keep in mind these mathematical relationships are based on a healthy adults with injury tolerances that are not compromised by medical conditions that would confine them to wheelchairs.

Test Scenario 2: Running into a wall

What happens to the chair?

As you watch our Crash Test video, you will see the powerchair and restrained occupant travel directly into a semi-rigid barrier. As far as “What happens to the chair?” … that’s about it. The powerchair hits the barrier … but not until after the occupant hits it.

What happens to the rider?

The occupant’s lower extremities making first contact with the barrier, beginning with the feet, and ending with contact of both knees. The occupant continues to travel forward, with its lower back and neck flexing until its forward motion is restrained by the seat belt.

We used a low wall in this scenario, but had the wall been higher, the occupant’s head would have likely hit the wall as well.

Similar to head injury standards used in motor vehicle crashes, there are standards for lower extremity injury. The occupant in our tests was outfitted with “load cells” in the long bones of each thigh to measure impact force in the legs and estimate injury to the knee-thigh-hip complex.

The advent of crash avoidance technology, like that in LUCI, including high-speed computing and positional and proximity sensing provides great opportunity to prevent accidents without limiting independence. For example, automatic braking systems, commonly known as ABS, show promising reductions in the incidence and severity of rear-impact collisions. Crash avoidance technology that eliminates or reduces the severity of powerchair tips, falls and crashes has the potential to provide similar benefits to powerchair riders without reducing their independence.

*Additional details about our research: